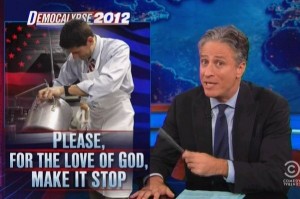 On Tuesday night, Jon Stewart led with his “Please, For The Love Of God, Make It Stop” segment. The “it” being the election. Pointing to Paul Ryan‘s recent soup kitchen visit woes, Stewart pleaded for the election to just be over already.

Originally, reports said Ryan washed already-clean dishes at the soup kitchen, Stewart noted. But later, Hard-Hitting Journalism revealed that Ryan did, indeed, wash dirty dishes that were left for him.

“Do you know how hard it is to make volunteering at a homeless shelter look like a negative thing?” Stewart asked. But the plot thickened, as the head of the organization said Ryan didn’t have permission to stage a photo op there.

“You broke into a homeless shelter to take a picture of you maybe or maybe not washing already-clean dishes?” Stewart asked. At least try harder, he said. Put some “oomph” into manipulating people’s emotions, he said. “Don’t phone in cynicism.”

Again, Stewart lamented that he just wants this all to be over. Plus, while we’ve been focusing on all the election hoopla, we’ve been neglecting interesting stories. Like the Lance Armstrong doping scandal.

Cue a Lewis Black rant about honesty and Armstrong. That somehow ended with an extended tangent about butt-chugging? Sure, why not.