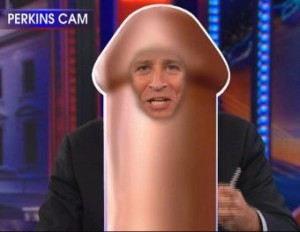 In his “Gaywatch” segment, Jon Stewart tackled President Obama‘s action, or lack thereof, regarding protection of gay people in the workplace. He then took on Family Research Council’s Tony Perkins, who’s made some remarks about what he perceives to be gay propaganda. So naturally, the segment with Perkins Cam. Which was basically Stewart’s face in a giant penis. Yep.

Stewart noted Obama has been under fire for not signing a federal order to protect LGBT people in the workplace, because he prefers a legislative solution. He then played a clip in which Obama said, “I’ve told my administration to keep looking every single day for actions we can take without Congress.”

“I found one,” Stewart observed. “How about you sign the executive order that would protect gay people in the workplace?” The states are rising up! Stewart mentioned that some states, like North Carolina, want to define marriage as being between one man and one woman.

Stewart then turned to an Anderson Cooper segment about the candy Mike & Ike. Turns out, they’re splitting up due to creative differences. So how does this fit into Gaywatch? Well according to Family Research Council spokesperson Tony Perkins, they’re “staging a gay divorce” as part of a new ad campaign aimed toward drawing in younger customers.

“What are you talking about?” Stewart asked. Nothing in the campaign says anything about them being gay. “I feel like you’re just seeing what you want to see. […] We need to talk from your perspective” Cue giant penis:

Oh, I have such a headache. Look, when a patient fixates on a certain perceived reality, usually it speaks to a deep seeded fear of what lies within themselves. You see what you want to see regardless, whether or not it’s there. It’s the voice of the untrammeled id. Bubbling up and erupting all over itself and others. You’re welcome.