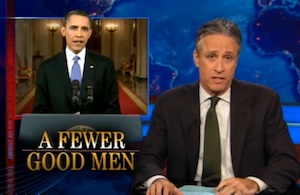 Because The Daily Show tapes an hour or two before prime time presidential speeches, Jon Stewart‘s reaction to Obama’s Wednesday night speech on military efforts in Afghanistan was not delivered until last night. The unintended consequence of a delayed reaction, however, can be seen in the segment below, as Stewart is able to sum up the reaction to the opiniotainers, who oddly (and sadly) seem to have more influence on public opinion as does the President. So…what was the take away? Nobody liked the speech.

Since Stewart’s recent appearance on Fox News Sunday with host Chris Wallace last weekend, many in the media criticism-cum-navel gazing racket have chimed in on the key debate point of that at times fiery interview: is Jon Stewart a political player or a only a comedian who is free to play by a different set of rules. After watching the segment below, one can reasonably wonder if it really matters, since even if he IS a political player, he doesn’t always follow a strict set of talking points for one political ideology. Perhaps the reason why he has become so influential (despite his humble protestations) is that he at least appears to try his best at calling it like he sees it, even if that means bringing ridicule to President Obama’s high fallutin’ prime time speech to draw down troops to a level still higher than when he took office.

While the following clip is not the funniest segment The Daily Show has ever produced (ending with a drug-harvest bit that falls remarkably flat), it is still smart and instructive of how Stewart plays his game. Watch the clip below, courtesy of Comedy Central: