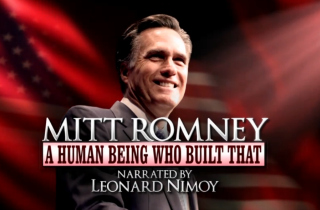 Titled “Mitt Romney: A Human Being Who Built That,” the parody mocks Romney for his background as the son of a wealthy governor and for his perceived “robotic” behavior, among other things.

“Being born [Gov. George Romney’s] son was anything but luck,” Nimoy narrated as the video cut to black and white footage of sperm swimming towards an egg. “Willard Mitt Romney won the coveted position only by out-competing thousands of less-motivated sperm.” On-screen displays designated the losing sperm as “teacher,” “welfare cheat,” “polio kid,” and “bureaucrat.”

Nimoy’s narration continues on to make deadpan jokes about Romney’s decision to not use taxpayer money to fund his education and instead seek the sponsorship of a local businessman (his father); his decision to enlist during the Vietnam War as a missionary in France, where he “bravely fought the French people’s love of wine”; and his ability to, “against the odds,” gain admission to Harvard and secure funding from his own stock, given to him by a local businessman (again, his father).

After explaining that Romney had built a successful education, business, and governorship, the narration said that there was one thing he had yet to build: a presidency. However, “as the elite East Coast, Harvard-educated creator of RomneyCare started to run in the most conservative Republican field in history, Romney realized the terrible truth: he had built himself the wrong way.”

The parody then shows a montage of Romney directly contradicting his previously “progressive” social views, “a monumental feat of self-reconstruction” in order to become a man who now claims he was “a severely conservative Republican governor.”

“Mitt Romney did it all by himself,” Nimoy concludes.