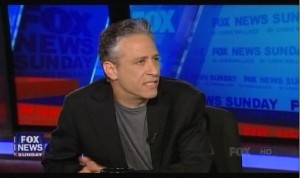 Jon Stewart appeared in his first Sunday morning news show interview ever with Chris Wallace, and unlike his often entertaining and jovial encounters with Fox News’ Bill O’Reilly, this confrontation was a bit more heated. Wallace opened the segment suggesting to Stewart “you love to take shots at Fox News” and from there Wallace was determined to get Stewart to admit that the mainstream media has a liberal bias. Yet Stewart refused to believe that anyone in the media is as “relentlessly activist” as Fox News.

Stewart maintained that besides possibly MSNBC, no media organization is in any way close to being as agenda-driven as Fox News. Despite multiple attempts by Wallace to convince Stewart of a liberal bias in the mainstream media, Stewart argued the “bias of the mainstream media is towards sensationalism, conflict and laziness.” And as proof of a lack of partisanship, Stewart suggested the media “jumped into the Weiner pool with such delight and such relish.”

The conversation got a bit more personal as Stewart and Wallace shared thoughts on how they viewed each other. Wallace declared “I think you want to be a political player.” Stewart responded “dead wrong” and reiterated that he is a comedian first. And then he admitted himself, “the embarrassment is that I’m given credibility in this world because of the disappointment that the public has in what the news media does.”

Stewart returned fire at Fox News, but by complimenting Wallace in the process:

We also learned from the interview that Stewart is disappointed with President Obama and that he even voted for President George Bush in 1988. Yet the most surprising moment may have been when Stewart got uncharacteristically really angry, declaring that viewers of Fox News are the “most consistently misinformed.” During the interview Stewart praised Wallace as being a tough and fair interviewer, and from this exchange, both Wallace and Stewart deserve praise for being able to engage in an honest and enlightening conversation.

Edited Version that played on Fox Below: