Jon Stewart On SOPA: ‘A Plan To Prevent Teen Pregnancy That Fills Penises With Cement’ 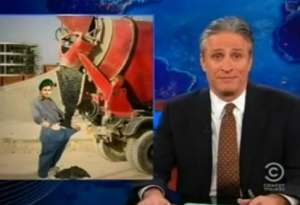 Jon Stewart went on the internet today and found, to his horror, that he would be forced to “go to the library, like a common masturbator”– Wikipedia was down. Why? The Stop Online Piracy Act, or SOPA– the bill that proposes to shut down websites that allegedly help facilitate media piracy. Stewart gave his run-down of what SOPA was, how Congress was deliberating it, and, finally, interviewed one of its “victims.”

RELATED: As Major Companies Plan Blackout Protest, Where Has The Mainstream Media Been On Coverage Of SOPA?

“What is this, 2009?” a frustrated Stewart asked when faced with today’s black page of Wikipedia in trying to log on. Without Wikipedia, Stewart was forced to look at “a notoriously unreliable source– the news.” There, he found out that SOPA would not actually take websites down, but just block access to them. As he put it, this was akin to “coming up with a plan to prevent teen pregnancy that fills penises with cement.”

He then looked at the Congressional dialogue and found many members of Congress were in need of clarification of what the bill does and, in their hour of need, called upon the “nerds” to help them. The sheer number of times the word “nerd” was thrown about was somewhat shocking to Stewart, but he still got the message from the Congressmen– that people who pirate clips and use other people’s work are “parasites.” “I see a greedy freeloading stooge to lacks the capacity to create his original content… and rationalizes it by claiming fair use… it makes me sick,” Stewart joked, while various copyrighted clips, along with old clips of Stewart using copyrighted clips on the show, played alongside him. His staff attempted a final copyright punchline by following up his line asking the audience to imagine a world without piracy with the song “Imagine,” bu Stewart panicked. “Even as a joke, we don’t have John Lennon copyright money!”

He then turned to the alleged victim– Daily Show correspondent Jessica Williams, dressed as some sort of 1920s orphan/cartoon runaway because she uploaded a video of herself dancing to Beyoncé on Youtube. Williams wasn’t done in by Beyoncé, however– it was the episode of Newhart playing on the television in the background that got her on copyright infringement.

The segment via Comedy Central: