Stewart Plays Game With O’Reilly: ‘Can You Make Bill O’Reilly Pay $4 For A Shrimp?’
video

Stewart Plays Game With O’Reilly: ‘Can You Make Bill O’Reilly Pay $4 For A Shrimp?’ 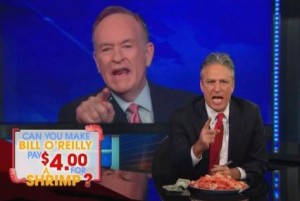 On Thursday night, Jon Stewart tackled the story about the GSA chief resigning in light of reports of lavish spending. Agreeing with the media outrage, Stewart went on to single out Bill O’Reilly, who, on his show, was particularly outraged about reports of them buying $4 shrimp. Stewart then played a game with him called, “Can You Make Bill O’Reilly Pay $4 For A Shrimp?”

Settled in with his plate of shrimp, Stewart introduced O’Reilly himself, who quickly claimed, “you’re wasting your time.” The game commenced. First scenario: O’Reilly has “a rare medical condition that requires the consumption of at least one shrimp per day.” Pinhead R Us sells them cheaper, but proceeds go to the ACLU — while Patriots sells them for four bucks, “but donates all its proceeds to a shell ter for flags that have been damaged in fires.” O’Reilly said he’d buy neither, but donate to the flag shelter from his website.

Stewart went on: “Would you pay $4 for a shrimp if it were wrapped in a $10 bill netting you a profit of $6?” O’Reilly answered, “I would steal the $4 shrimp, and then donate it to the Occupy Wall Street folks so they know what the 1%-ers eat.”

Aliens have invaded earth, and have used some kind of shrimpifying ray, turning all our food into shrimp and, against all economic principles […] somehow raises the price — to $4. And you discover there is an exhaust port in their space ship that you can use to blow it up. The port is the same exact size and shape of a shrimp. Would you buy a $4 shrimp to throw into the exhaust port and save the planet?

O’Reilly replied, “Any planet that allows $4 shrimp is not worth saving.” Final attempt: “A man comes to you with a time machine. The information that he has is that Hitler is allergic to shrimp.” But alas! O’Reilly was saved by the buzzer.