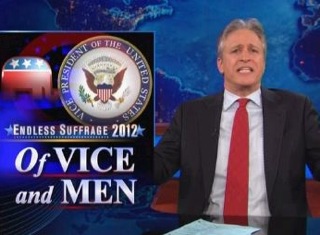 Today’s Daily Show began with some pessimism in the way of Mitt Romney— it seems that anyone who would be a good vice presidential candidate for him wants nothing to do with the ticket– from Condoleezza Rice to Marco Rubio to Tim Pawlenty. Stewart did find one person who said something less adamant than “Not me!” when mentioned for the bottom of the slate, however: Herman Cain, who also sat down for an extensive interview with John Oliver in which he delivered the American people from an alien invasion.

RELATED: The Catholic League Is Pleased To See Jon Stewart Acknowledge Their Campaign

“Politicians are clamoring!” Stewart began, before finding that South Carolina Governor Nikki Haley and former Minnesota Governor Pawlenty had taken themselves out of the running. Rice did so adamantly: “How many ways can I say it? Not me,” she told Fox News, in a way Stewart equated to what you say when someone shouts ‘Who wants free tickets to the Puppetry of the Penis?'”

He then turned to Sen. Marco Rubio, who at least recommended someone else to replace him: Rob Portman. “I don’t know who that is, but let’s see what he has to say about it,” Stewart joked. Turns out Portman wants Rubio to be Vice President, who wants Jeb Bush to step in, who wants Rubio to step in. “It sounds like a dare nobody wants to take!” Stewart joked. And who would accept a dare nobody wants to take? Herman Cain!

Cain sat down with John Oliver for an extensive interview detailing the most awkward and uncomfortable details of his campaign. No, Cain still does not know who the president of Uzbekistan is, but insists he did look it up once, and he does think his Libya gaffe was “awkward.” He also gives a really moving speech about withstanding an incoming alien assault as President of the United States that is must-see tv.