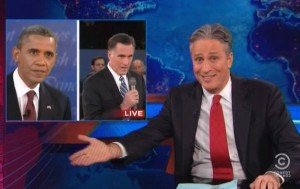 Jon Stewart marveled at just how much President Obama‘s second debate performance improved upon his first one, remarking that unlike two weeks ago, the president apparently “decided to attend this debate.” Stewart gave Obama credit for going on the attack against Mitt Romney, and even gave Obama the win on the Libya debate that Stewart thought should have been Romney’s “ace in the hole.”

Stewart noticed something was different about Obama’s second debate performance as soon as the president started calling out Romney for lying, which Stewart said led to a rather substantive discussion “about how much they fucking hate each other.” He highlighted a number of their most contentious confrontations and the multitude of zingers Obama threw Romney’s way.

One of the more amusing moments for Stewart was Romney’s “binders full of women” comment, with Stewart offering alternatives like “book of broads” or “notebook of nipples.”

However, Stewart expected Romney to score big points when the subject came to the Obama administration’s muddled response to the attacks on the U.S. consulate in Benghazi. Obama gave a weak response to Romney confronting him on it, and Stewart said Romney could have easily won the round, but instead he fell into a “weird nitpicky semantic trap.”

After Obama told Romney to “please proceed,” Stewart compared Romney to Wile E. Coyote. He also looked at the media reactions to the debate, with “MSNBC no longer seem[ing] suicidal” and Fox News criticizing everything from the questions to the bias of the moderator. Stewart decided to just let Fox News “cry themselves to sleep.”