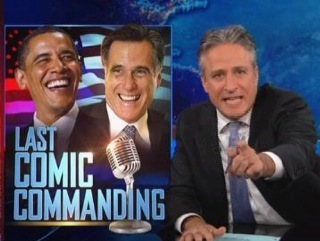 With Mitt Romney finally all but the official Republican nominee for president this year, Jon Stewart was hoping for a substantive debate about issues between the two candidates. Needless to say, he was far from getting that– instead, Diane Sawyer asked Romney if he was funny, a question President Obama himself had answered on the network himself. While the two candidates were evaluating their own humor, Stewart decided to weigh in himself, as a seasoned comedian.”

Stewart began with a look at President Obama’s “comedy” career, though he thought a direct comparison was unfair. “They are at different points in their respective careers,” Stewart argued, with President Obama playing to the White House Correspondents’ Dinner and Romney still on the campaign tour. President Obama, Stewart joked, was “killing”– and by “killing,” he meant Navy Seals were out killing Osama bin Laden during his jokes.

Then there was Romney, who joked once that he was “unemployed” (that didn’t go over so well) and that someone had grabbed his backside during a photo op. This latter joke, Stewart approved of. “That’s grade A uncle humor!” he praised, adding that it was “better than the time Biden tried that trick on a pack of visiting cub scouts.”

Ultimately, Stewart gave Romney the edge for proclaiming, “I live for laughter,” and for President Obama’s State of the Union milk joke being so bad. Except, since this is Romney, there is a video of him saying the exact opposite of “I live for laughter.”