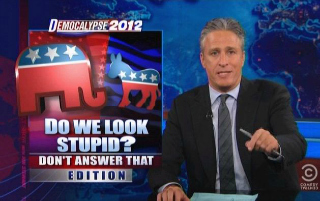 During Wednesday night’s edition of The Daily Show, host Jon Stewart broke down the reaction to President Obama’s now-famous “you didn’t build that” remark, characterizing the conservative outrage as “a willful, out-of-context misunderstanding.”

Stewart showed that following the controversial sentence, President Obama went on to say that “the point is that when we succeed, we succeed because of our individual initiative, but also because we do things together.”

“Oh, that’s your point,” reacted Stewart. “Here’s a tip: when someone says, ‘the point is,’ the next thing they say usually nine times out of 10 is the point. But I see what happened here. By using the phrase “you didn’t build that,” you create confusion by using the demonstrative single pronoun instead of the plural ‘those,’ which of course was referring to the antecedent roads and bridges … Never say “that,” because the singular demonstrative pronoun points to a specific finger. Always use the plural “those.” Then you don’t get in trouble.”

The show then played a clip of various conservative pundits decrying the Obama quote as either “socialism,” “anti-business” or “grade school Marxism,” which prompted Stewart to quip: “Or as your second grade teacher might have referred to it: Sharing.”

“He clearly said before ‘you didn’t build that,’ he was talking about building roads and bridges. It was in the speech,” he continued. “You really want to hang your entire campaign on a willful, out-of-context misunderstanding?”

Stewart then turned his attention to Fox & Friends co-host Steve Doocy who attempted to play the Obama sound bite, with full context, for his audience… only to play a similarly-edited clip still without the “roads and bridges” context. Similarly, he mocked Fox & Friends for their attempt to use children with a lemonade stand to confirm the narrative of the “you didn’t build that” controversy.

Watch the segment below, via Comedy Central: