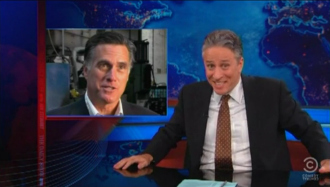 During Tuesday night’s edition of The Daily Show, host Jon Stewart called out the Republicans’ “cognitive dissonance” over the killing of Osama bin Laden and the taxpayer-funded bailout of GM and Chrysler.

“Cognitive dissonance,” explained Stewart, “is when you hold two contradictory ideas in your mind, at the same time.” Lately, the comedian contends, it seems like Republicans have been able to square away the opposing ideas in their head.

His first example: “Republicans, like all Americans, wanted very much to see Osama bin Laden dead. At the same time, they believe Barack Obama is incapable of doing anything right.” So how do the Republicans square away those competing ideas? Stewart played a reel of Republican personalities — including Jonah Goldberg and John Bolton — criticizing President Obama for “bragging” about his giving the orders to raid and kill Osama bin Laden.

“Okay, fine! You got our number one enemy! But you bragged about it, so it doesn’t count,” Stewart joked, and then played clips of former Secretary of Defense Donald Rumsfeld minimizing Obama’s accomplishment by saying it wasn’t a tough decision to make.

Rumsfeld’s assertions about the Obama decision to kill bin Laden is ridiculous, Stewart said, because one person who did have the chance to go after high-level top Al Qaeda operatives in Pakistan was: Donald Rumsfeld, who in 2005 reportedly turned down a raid mission.

Stewart’s next example of Republican cognitive dissonance came courtesy of presumptive Republican nominee Mitt Romney‘s Monday claims that he will “take a lot of credit” for the auto industry’s seeming recovery.

A flabbergasted Stewart joked “You can just take credit for shit? Hey, I remember saying to a friend of mine ‘I wish tollbooths weren’t such a pain-in-the-ass. And they slowed down traffic so much.’ So you know what? EZ-Pass, you’re welcome. That was me […] I remember. I told someone in a bar.”

The comedian then pointed out how Romney advocated against exactly what the federal government did in the wake of GM and Chryslers’ failures, and jokingly praised Romney’s new strategy: “Instead of having to find reasons to criticize Obama for things he’s done right, find ways to claim those achievements as your own.”

Check out the full segment below, via Comedy Central: