Jon Stewart Raises Eyebrow At Rep. Weiner: ‘I Know What My Erect Penis Looks Like’ 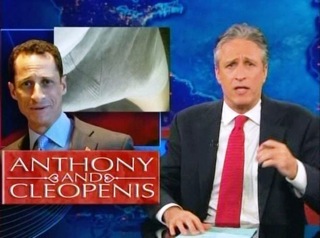 Jon Stewart has been following all the latest developments in the Rep. Anthony Weiner Twitter scandal, and tonight reminded his audience that, as a friend of the Congressman, he was expecting a “reasonable-seeming explanation” from Rep. Weiner for all this. Instead, Stewart spent the segment shaking his head at how a man could possibly not know what his own penis looks like.

Stewart tried to start off the segment somewhat maturely, but that lasted about four seconds until a graphic with the headline “Anthony and Cleopenis” appeared.” It went downhill from there, until Stewart summed up the situation like this: “bottom line is, there was a junk shot.” As a friend, Stewart noted that “I was hoping that he’d have a very clear and strong reasonably seeming explanation” for the matter. Instead, he played a clip of Rep. Weiner’s interview with Luke Russert, where he said he couldn’t say “with certitude” who was in that picture. “Well, I guess that clears things up,” he joked.

He then went through his own personal list of things upon which he has certitude: “Empire Strikes Back is the best Star Wars movie; OJ killed those two people; what my erect penis looks like in my own underwear… from a bird’s eye view, of course.” He then added his hand as an afterthought to emphasize how easily he’d be able to recognize himself in such a photo: “I know my penis like the front of my hand that I used to get to know my penis.”

While Stewart promised to keep his audience “apenis” of any new developments, he kept tonight’s update short and dubious. At this point, it’s hard to predict what Weinergate Day 6 will bring.