Jon Stewart Responds To Being Banned In The UK: ‘Are You Not Allowed To Praise England In England?’ 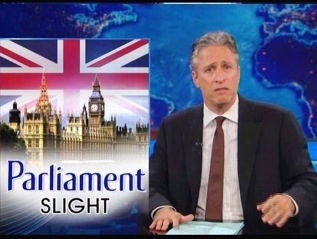 Jon Stewart got a bit of a surprise last week, as his coverage of the News of the World scandal got his show banned in England. No, not because he went too far attacking anyone– in fact his entire segment was about how “England is awesome“– but because he used Parliamentary footage in satire: a crime in the UK. Going through a list of things that aren‘t banned in the UK, he couldn’t help but ask: “who is the arbiter of what gets to go on the air in your country?”

Playing the old clip of himself shouting about how awesome England was during the scandal, he asked, “who is that young go-getter that seems to be 5-8 time zones behind everyone else?” He noted that the clip was aired throughout the world, in such beacons of freedom as “Chad, Somalia, Saudi Arabia, Syria, and Yemen.” But England banned the clip. “We were praising it!” Stewart shouted. “Are you not allowed to praise England in England? Is it part of some sort of 1683 Edict of False Modesty?”