Jon Stewart Returning to Daily Show This Week, Look Back on Summer of John Oliver 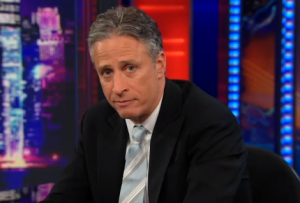 Daily Show host Jon Stewart is back in the anchor chair on Tuesday night, after taking three months off to direct Rosewater, his first feature film. Stewart reclaims the hosting mantle from correspondent John Oliver, who kept the show steady thanks to a constant barrage of summer stories from Paula Deen to Anthony Weiner. Or, ahem, Carlos Danger. Be sure to check out Mediaite’s nightly coverage of The Daily Show when Stewart returns tomorrow night.

Oliver’s first week was boosted considerably by the first wave of NSA revelations, and continued along with the show’s tradition of biting media criticism, including segments blasting CNN and Fox News.

The Daily Show posted a compilation video on its website saluting Oliver’s three-month long reign, as well as a video featuring each bald-faced lie Oliver told the audience about Stewart’s whereabouts.

Stewart’s only big media appearance during his hiatus was an interview with his Egyptian counterpart Bassem Youssef, but he did made two brief Skype appearances on Comedy Central late night during the summer. The first was a brief check-in with Oliver in late June to see how the show was doing, and the second was a brief cameo in Stephen Colbert‘s epic Daft Punk-less dance party. You can check out both videos below, via Comedy Central:

And just to bookend this crazy summer, here are clips from the first and last episodes of the Summer of Oliver.