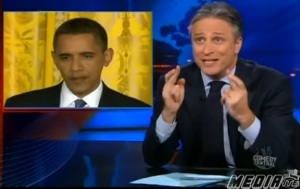 Retuning from a two-week break last night, Jon Stewart spent the better part of his opening segment waxing comedic about the many failed attempts to solve the BP oil spill. And while Stewart made with the funny in his typically smart fashion, cultural commentators are likely to notice that he had also targeted the seeming disconnect between President Obama‘s urgent rhetoric over stemming the spill and the numerous photo ops in which he participated during the same time.

Defenders of the President are sure to claim (correctly) that White House business can’t completely stop because of the oil spill, and that the pedestrian tasks of congratulating the winners of the men’s and women’s NCAA basketball tournament were likely scheduled long before the spill even occurred. And in truth, its not like Obama can don his own wet suit and dive down and fix the leak himself. But that’s the exact sort of defense that supporters of the Bush administration were often ridiculed for during the last 8 or so years (though one might make the claim that the issues facing the Bush White House were of an all together different scale than this oil spill.)

While Stewart’s criticism of Obama’s disconnected rhetoric was sharp, it seemed to be a kinder and gentler sort of dig, focusing more on the absurdities of his position, not the man. So, no, this segment doesn’t demonstrate that Obama has somehow lost the support of The Daily Show crowd (or Jon Stewart.) That seems unlikely to happen anytime soon, but we’ll know it as soon as Stewart starts mocking Obama’s speech patterns in the same way he did with George W. Bush