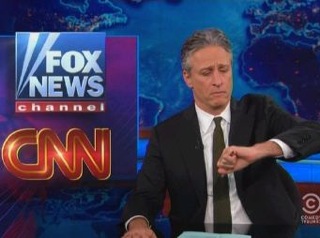 Chief Justice John Roberts pulled a fast one on the media who tried to skim his decision today, as he argued that the individual mandate was unconstitutional before he declared it a tax. Jon Stewart spent much of tonight pointing and laughing at the networks that got it wrong today because of that– namely, CNN and Fox News– who he compared to children desperate to open their presents on Christmas Day and the decision to the last Harry Potter book.

“It was a moment of great drama and, like many of our greatest dramas, a work of complete fiction,” Stewart joked, mocking Wolf Blitzer for “constitutional mandate hyperventilation” after he had been told that the Court struck down the mandate. Stewart then played Blitzer’s subsequent response, that there were “widely different” reports: “there’s what you have been saying, and then there’s what happened.”

“No sympathy, CNN!” Stewart told the network. “You’ve been driving us nuts with this shit for months, it’s like Christmas Morning for you guys… you run downstairs and your parents are like ‘slow down there, Ace, we’ve got all day.'” Stewart then narrated the sad end of this tale– the kids tearing apart the present in the box in a fever, only to find it was a parrot, which they killed.

But Stewart didn’t restrain his mockery– he went after President Obama just as much as CNN for the months in which he and the Democrats claimed that the individual mandate did not impose a “tax,” which now they openly admitted because the Chief Justice said so.