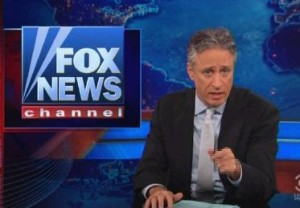 Jon Stewart tackled Mitt Romney and Fox News on Thursday. It’s Fox’s job, he said, to get Romney elected. But that’s a little tricky since they weren’t exactly keen on him throughout the primary race. So how will they handle this change of heart? Stewart took a look at some of their pivots. And he wasn’t convinced.

The nomination has pretty much been snapped up by Willard Scott Mittington Romnisaurus. So now, Stewart said, it’s from for the GOP to rally around Romney. And they’re really excited. Or something.

Stewart played some clips of Republicans saying they’re excited…that the primary process is over. And to get President Obama out of the White House. “Good one,” he quipped.

“Of course, these are Congress people, it’s not their job to get Mitt Romney elected,” Stewart said. “Their job is to stop the current president from getting anything done. Romney’s election is Fox’s job. It’s not gonna be a slam-dunk either because during the primary Romney’s nomination was not unanimous.”

Many, like Sarah Palin, as the following clip showed, were not convinced. So how are they going to make this pivot? Then he played a clip that showed Palin staunchly saying, “I am convinced” about Romney.

“It’s like how vegans sell you on tofu,” Stewart said. “‘I know it tastes like shit, just put enough rice and soy sauce in there, you barely even know you are eating curdled soybean, it will be fine.”

Looking at more Fox pivots, Stewart noted, “Are you fucking kidding me? Conservatives will never go for this guy, to he’s the greatest thing since sliced Reagan.”

Do have a look, via Comedy Central: