Jon Stewart Ridicules Santorum’s Snob Remark: You Are Against College Because It Is ‘Fancy’?
video

Jon Stewart Ridicules Santorum’s Snob Remark: You Are Against College Because It Is ‘Fancy’?

Jon Stewart Ridicules Santorum:: You're Against College Because It's 'Fancy'? 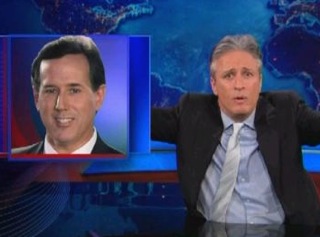 Today, Jon Stewart tried to inaugurate a new segment of the Daily Show based on how silly Rick Santorum‘s comments over the weekend seem to him, entitled: “How Is It That Mitt Romney Hasn’t Crushed This Guy Yet?” That segment began with Santorum insulting John F. Kennedy but quickly slipped into Romney and his wife’s many Cadillacs, which quickly morphed into a second new segment, “How Is It That Rick Santorum Hasn’t Crushed This Guy Yet?”

Stewart had two juicy Santorum quotes waiting for him this weekend, and the first he went for was that Kennedy’s separation of church and state comments made him want to throw up because it sounded like he wanted all faiths excluded from the government. “How do you hear ‘all faiths are welcome’ as ‘no faiths are welcome’?” he asked, shocked, jokingly interpreting Dr. Martin Luther King, Jr.‘s famous line as “no black or white children can play together, only children of no color are allowed to play.” He concluded it was fine that Santorum felt the way he did about Kennedy because “if John F. Kennedy were alive today, knowing you were running for President would make him shit his pants.”

Not that Romney was doing much better, calling NASCAR “sport” (“Sport is something that requires a horse or a boat or an ascot,” Stewart corrected) and talking about all his NASCAR team owning friends. But Stewart could not leave the segment without playing the clip of Santorum saying “what a snob!” after noting that President Obama likes the idea of people going to college. “Ooh, look who’s educating his children,” Stewart faux taunted, before getting serious again: “You’re against people educating their kids because it’s fancy?”