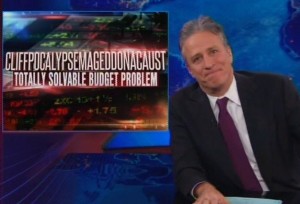 Congress is finding it very hard to come to any sort of reasonable compromise on the impending “fiscal cliff,” and tonight Jon Stewart laid into both sides for their unwillingness to seriously tackle the impending cuts and tax rate expirations that will trigger automatically by the December 31st deadline. Stewart hyped up the doom-and-gloom headlines over the cliff as a fiscal “cliffpocalypsemageddonacaust.”

After some jabs at Mitt Romney and President Obama for their lunch earlier today, Stewart said that Obama’s victory has made him comfortable and given him absolutely “nothing to worry about”… except for the whole economic destabilization thing. Stewart reminded viewers that Congress tried to deal with this already, but instead they pushed it down the road and created a “catastrophic penalty [to] crash our economy” to force them to work together.

Stewart compared this tactic to human beings designing an asteroid then setting it to crash into the earth in order to force us to work harder to deal with the asteroid that’s about to hit.

Of course, Democrats want tax hikes on the table, while Republicans want to tackle entitlement cuts. But since each side is pretty much not on board with each other’s offers, Stewart said “the only way to solve this” fiscal doom is two options that are completely off the table.

Stewart mocked the way the language of the “fiscal cliff” has been softened in order to lessen its severity, including alternatives like “hills,” “slopes,” and Stewart’s favorite, “a fiscal garden.” Stewart laid out the point of the softened rhetoric:

“Our country faces a fiscal disaster, and we don’t have to compromise or fix it, because we can just sit back in our garden and enjoy the fruits and flowery aromas of Washington in December. Fuck us.”