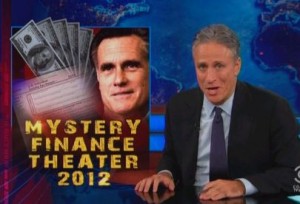 On his show tonight, Jon Stewart marveled at how many Republicans have been pressuring Mitt Romney to release his tax returns, but as for the conservatives defending Romney and saying he doesn’t need to release his tax returns, he called them out for hypocrisy, considering how much scrutiny conservatives have wanted to apply to President Obama‘s past, especially at the height of Birthergate.

Stewart mocked Romney for saying that if he released the returns, the Obama campaign would have a field day, distilling Romney’s explanation down to “the Democrats will be mean to you.” But then he ripped conservatives for defending Romney keeping his tax returns secret by going down a whole list of “frivolous transparency demands” that conservatives wanted in order to completely vet Obama’s past.

He showed clips of them wanting to see the president’s full college records, his time at the Harvard Law Review, everything he did in the Illinois State Senate, and even some nonsense about Michelle Obama allegedly using the word “whiteys” at some point.

Of course, as Stewart noted, once Romney releases his tax returns, Democrats will be going over them line-by-line in order to scrutinize them as heavily as possible. What could possibly be analogous to that? Why, the doubt that was cast over Obama’s birth certificate, with people disputing its authenticity by narrowly focusing on little minutiae that might prove it to be fake or something.