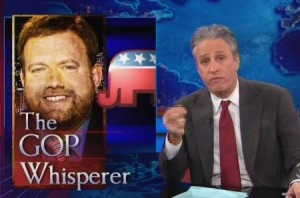 Jon Stewart tonight tried to figure out the exact problem with the Republican party and why the “self-made and virtuous patriot” Mitt Romney lost the election to the “foreign-born socialist tyrant” Barack Obama The answer: messaging. Stewart took square aim at the rebranding of the GOP being aided by pollster and master wordsmith Frank Luntz, whose ideas to rebrand the Republican party include words that mask the actual policy positions of the Republican party.

Stewart found it remarkable that messaging would be the Republican party’s problem, mockingly wondering what if there was an entire media channel to distribute the conservative message 24/7. He ended up settling on “Ferrett News” as a name for this hypothetical new outlet.

Stewart then turned to Frank Luntz, wordsmith and Stewart-designated “Republican Batman,” who is well known for changing language in order to make conservative policies sound better to the public. And even that very process is being renamed, with Gretchen Carlson referring to unfavorable political phrases as “language errors.”

Stewart listened to Luntz’s recommendations for how to change the language and concluded that Luntz merely wants language that “sounds better” than actual GOP policies. In contrast, Stewart was marveled by the recommendation of Bobby Jindal that the party needs to stop being the “stupid party.”

But instead, Stewart noticed that Republicans are more interested in trying to change voting rules, or as Stewart phrased it, “cheating.” Though after an intense process of Luntzification, Stewart ended up with the more pleasing “winning through process innovation,” ending by saying that it “takes a lot of hard work… to remain stupid.”