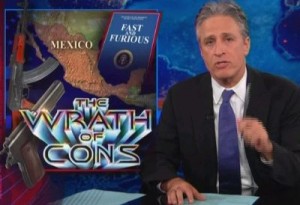 On the heels of the increasing criticism of the Obama administration’s handling of Operation Fast and Furious and use of executive power, Jon Stewart took aim at one particular cable news network that’s been churning out outrage for some time now. Despite having no such sentiments toward President Obama‘s Republican predecessor for rather, er, similar actions. You guessed it: Fox News.

Stewart noted the numerous instances during which Obama’s Fast and Furious ordeal was dubbed by those on Fox as his “Watergate.” The problem, he said, is that they’ve become the “Fox who cries wolf.” Their “outrage repertoire has been so overused as to render justified outrage meaningless.”

Cue the “indoctrination” outrage when second graders sang a song about Obama, complete with one comparison to…Khmer Rouge. Stewart then moved on to the fervor of anger surrounding Obama’s use of an executive order, reminding Fox, and us, of one George W. Bush. When he used the method in question, the sound that followed his helpful explanation (“That means I did it on my own”) wasn’t an angry one. It was applause.

Further railing against the criticisms of the “lawlessness” of the Obama administration, Stewart asked:

What did y’all think of the Bush years shenanigans? Secret torture programs, wiretapping citizens without a warrant, putting signed statements onto laws that negated what the law says, stonewalling Congress, holding Americans without trial by calling them enemy combatants? What was your working theory on the tyranny and lawlessness of those secret programs?

He then went to an older Fox clip that contained the remark, “To a certain degree you have to trust the people you elected when it comes to national security.”

“Seems like over the past four years Fox has lost the capacity to trust their leaders,” Stewart said. “I think I can help. Close your eyes, guys, and fall backwards into my arms. We’ll catch you.” Whispering, he added, “Nobody catch them.”