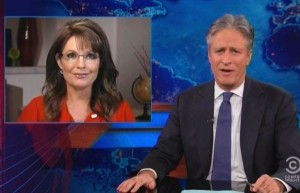 On Monday night, Jon Stewart took a look back at the vice presidential debate — and, in particular, dissected the reaction. While MSNBC accepted defeat after the first debate, he noted, Fox News had a quite a different spin altogether.

Stewart began by noting that Vice President Joe Biden was his usual “crazy uncle” self at the debate. Not his “lovable gaffe-tastic caricature” of himself. Indeed, he was fact-checking in real time.

One of the “great pleasures” of the debate, Stewart added, was seeing how many different way Biden implied Paul Ryan was lying without actually saying the word “lie.” Sometimes he even pushed back when it came to the moderator. And he even addressed viewers (well, seniors) directly!

But for every big political event, the most important part, of course, is the media reaction. “We all remember what happened when the Ghost of Barack Obama debated Mitt Romney,” Stewart reminded us. MSNBC was especially hurt, he noted, replaying Chris Matthews‘ meltdown.

But alas, the post-debate chatter on Fox News consisted largely of criticism of the moderator, as well as Biden’s “rude” demeanor. Fox’s response to Biden’s showing “was to delegitimize every aspect of that showing,” Stewart asserted — going on to refer to Dr. Keith Ablow‘s suggestion of dementia. Yes, Stewart said, “that rare form of dementia where you remember too much.”

He summed up Fox’s reaction thusly: “Joe Biden was an angry, demented, abusive, drunk, old, crazy person who mopped the floor with our guy.”