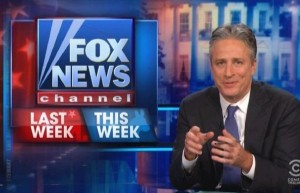 The Daily Show spent all week focused on the Democratic National Convention, but Jon Stewart still found time tonight to have some fun with one of his favorite targets: Fox News. Stewart noticed some very glaring discrepancies in how the network covered the DNC and RNC, bashing the network for praising Republicans for the very things that they were strongly criticizing the Democrats for this week, from the policy in the speeches to the celebrities speaking at the conventions.

Stewart brought up clips of Fox anchors playing down the idea that the Republicans should talk about social issues, with Laura Ingraham remarking that Romney shouldn’t have to make a change in the party platform because he disagrees with a plank on abortion. In a valley-girl voice, Stewart mocked Ingraham by saying, “Mitt Romney can wipe his ass with it for all we care!” Of course, he immediately contrasted it with how much Fox scrambled to bring up the controversy over the Democrats not mentioning God in their platform. Stewart mockingly remarked, “Fox is truly doing God’s work.”

Stewart also brought up Fox News bashing the inclusion of celebrities at the DNC while expressing their profound love of Clint Eastwood last week. Stewart noticed that not only can Fox News not seem to recall anything that happened during the Bush presidency, but has “amnesia” that is making it forget what happened only a week ago. Eric Bolling was touched by Ann Romney‘s story, but was completely deprecating of Michelle Obama‘s. Stewart said, “Between the weekend of Tampa and Charlotte, Eric Bolling’s heart shrank three sizes.”

Last week, Brit Hume was enthused by how specific Paul Ryan got when talking about policy, but found Bill Clinton‘s detailed speech to be “wonky” and concerned with fitting in so many details. Chris Wallace at the DNC? The Democrats have “no specific plans about this economy.” But at the RNC, Wallace decided to not share what he liked and disliked about the speech because he didn’t want to take away from the celebrating.

And as for Wallace’s comment that people should just “shut up and watch,” Stewart noticed that would make a perfect slogan for Fox News.