Jon Stewart Rips Petraeus Conspiracy Theories: ‘We Don’t Have Facts, But We Do Have Feelings’

Stewart Rips Petraeus Conspiracy Ideas: 'We Don't Have Facts, But We Do Have Feelings'
Twitter share button 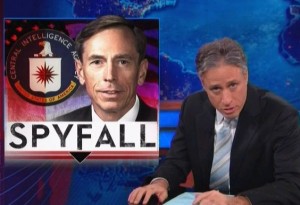 On his show Monday night, Jon Stewart took a closer look at the scandal of the moment. The one involving David Petraeus, that is. Looking back on his interview with Paula Broadwell (he never even suspected!), Stewart sifted through some of the more melodramatic media reactions.

An affair with a CIA director would should involved Hollywood-level mystery and intrigue, right? A sexy Russian spy? No?
Nope. Just some emails, Stewart noted disappointedly. That’s all it took to get caught.

The emails that came from Broadwell, a name vaguely familiar to Stewart. Refreshing his memory of his previous interview with Broadwell, Stewart declared, “I am the worst journalist in the world.”

“The whole thing was innuendo after innuendo,” Stewart said of the interview, “I had her right there talking about Petraeus, and it never crossed my mind!” (Not to mention, he added, the title of her book.)

Then came Stewart’s reaction to the media reaction, beginning with one Newt Gingrich and ending with an abundance of conspiracy theories — ranging from the if-only-a-Republican-had-known-about-this-prior-to-election-day response (Eric Cantor did know), to the “suspicious” timing of the news prior to the Benghazi hearing.

And to those of you comparing it all to Homeland? Psh. It’s Melrose Place.