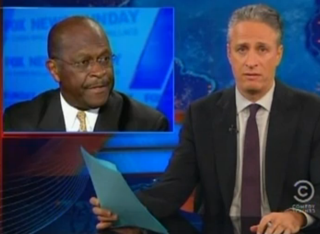 The fundraising race on the Republican side in anticipation for 2012 has claimed several victims in the past few weeks, in, as Jon Stewart joked, “what will definitely be called the most important election of our lifetime,” but few have adequately depicted the swift elimination of each with the violence it deserves. Stewart made up for that tonight, sending off candidates with mini wildlife films after mercilessly tearing them apart for their mistakes.

Rick Santorum got the most traditional way out– a wildebeest eaten by a giant alligator for acquiring so few funds. Then came “old silverback Newt Gingrich,” who Stewart noted was “actually in a lot less debt” than America is, hitting the one million mark in deficit while the nation is still $45,000 in debt per person.

Then Stewart turned to Tim Pawlenty, whose campaign to be taken seriously while being thoroughly boring brought out some of the best in Stewart. “Ooh, Tim Pawlenty,” he mocked, “taking a bold stance against charisma! Saying it’s got no place in politics!” Jokingly mimicking Pawlenty asking whether politics was a “popularity contest,” he answered himself: “oh wait, it is.” Pawlenty’s animal alter ego didn’t even get killed by another animal– it was a mammal chopping down a tree, getting pummeled by the very tree he just cut down. “If a Pawlenty campaign falls in the woods,” Stewart asked, “does it make a sound?”

Then there is Herman Cain, who, Stewart ceded, was not doing bad at all in the money race– but then there is his understanding of the First Amendment. Stewart tore into his statements on last week’s Fox News Sunday, where Cain declared that the First Amendment gave communities the right to ban mosques. “There are some pronoun issues here,” Stewart quipped about Cain describing the struggle as “our First Amendment” protecting against “their mosque.” “the First Amendment protects their mosque from us,” Stewart corrected, similarly going through his claim that Islam is different from other religions in that it has an element of law in it. Cain, perhaps most pathetically, didn’t even get to die in animal form– he is just a domestic cat, head stuck in a tissue box.