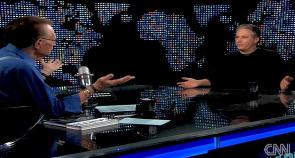 Talking to Larry King, Stewart explained why his rally is not “Anti-Glenn Beck,” took aim at NPR for banning employees from attending…and made fun of CNN.

Later: “Can I tell you something? You made the right choice. You are leaving this place. You know what you are? You’re the last guy out of a burning building, my friend.”

King asked Stewart to describe his rally, and if it was a direct response to Glenn Beck’s 8/28 rally. “It is not the Anti-Glenn Beck rally,” he said. “It’s a very similar – what we are doing is, we are using the rally format to do the same thing we do with our shows. The message will be a very similar-type idea.”

Stewart said his books are like the Daily Show in book form – this will be Daily Show in rally form. So don’t expect it to be overtly political. Which brings us to the NPR issue – which told its employees they are not allowed to attend.

“To fight back, I have prohibited my employees from describing events in esoteric terms,” said Stewart. “Very little NPR can do to hurt a fella. Other than perhaps come and reclaim my tote bag. From now on, I’m carrying everything just in my arms like this. I will no longer use their tote bags. I find it interesting that you would forbid people to go to something that even we don’t really know what it is.”

No love lost for NPR – and likely even less so after last night.

Here’s part of the interview, from CNN: