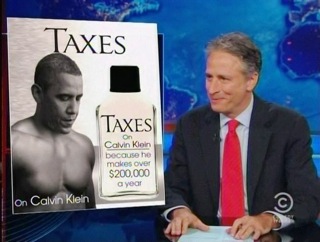 This debt ceiling debate talk is doing a fairly good job of getting on the nerves of everyone in America, and Jon Stewart‘s nightly recap caught most of the Congressional outrage. Tonight’s Daily Show opened with a roundup of the progress (or lack thereof) Congress had achieved in its budget talks, highlighting the strangest evolution in rhetoric of them all: Republicans were no longer allowed to use the word “rich”– those people are now “job creators.”

With the weeks and weeks of debate and deliberation, Stewart expressed some hope that progress would be made, particularly throughout the past weekend as the deadline looms nearer. Unfortunately, reporters could only bring back news of “no visible progress”– “all the progress,” Stewart joked, “took place in the microbial world.”

So what’s taking so long? Rep. Sheila Jackson Lee recently took the floor of the House to posit a theory as to why, though she didn’t quite get to spitting it out, leaving Stewart to guess why President Obama is being treated more rudely, in her eyes, than past presidents. “He is the first President to own a Portuguese water dog?” he asked. After getting a bit distracted by the Congresswoman’s zebra shirt– and finding that the stripes wrote out “because he’s black”– he then turned to the Republican’s reason: “because they think he’s crazy.” But after a detour that included some Democratic chest hair musings (where is it? “Is there some sort of Nair litmus test?”), Stewart noticed something peculiar: the people whose taxes would be raised by Democratic plans, the “rich,” were no longer being called that. Instead, they were now deemed “job creators,” a new term that Stewart applied to other definitions of “rich,” like good cake.