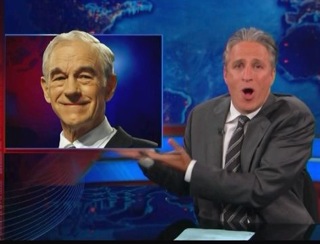 On Sunday morning, Jon Stewart woke up to a cornucopia of material to write into Monday’s program: Tim Pawlenty‘s sad campaign goodbye, Rep. Michele Bachmann‘s straw poll victory, Rick Perry‘s entry into the race. He somehow covered all his bases and then some tonight: finding plenty of time for the one thing the media didn’t cover: the fact that Rep. Ron Paul has emerged as a top-tier candidate in 2012.

Beginning with the news that Pawlenty exited the race, he attempted to keep awake but, of course, failed. “Here’s the problem with that guy in Iowa: any time he’s around, you can’t work any farm machinery.” He also had some problems understanding that Texas governor Perry, “the Josh Brolin character from W,” was “a real guy,” though he had a pretty convoluted explanation for why he wasn’t “George Bush on steroids” involving horse semen and solar flares.

Stewart then turned to the Sunday morning talk show talking points, and found that, universally, Bachmann, Romney, and Perry were considered the “top tier.” “You’re not forgetting anyone?” Stewart asked, referring to Rep. Paul, who had come in second. Rep. Paul managed to be ignored over Rick Santorum— “he lost to the guy who lost so bad he dropped out of the race”– and Jon Huntsman, who got 69 votes. “If all of Jon Huntsman’s supporters met at the Ames, Iowa Quiznos, the fire marshal would say, ‘yeah, that’s fine, here are some more seats.'” Stewart found it bewildering that Rep. Paul had become “the 13th floor of a hotel,” culminating with a clip of a CNN anchor requesting a reporter leave out the Ron Paul reporting if they found any juicy Sarah Palin stuff– saying, in Stewart’s words, “I mean, f*ck that guy, right?”