Jon Stewart Scorches Republican Debate And Media Coverage Of It 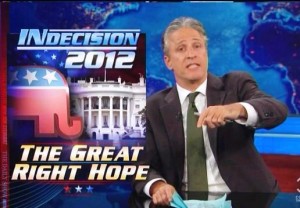 On Thursday night’s Daily Show, host Jon Stewart took advantage of his early taping time to give yesterday’s Republican Presidential Debate a good going-over, devoting two segments to it. The first segment was funny, yet scattershot, an indication of the lackluster quality of a debate that contained few surprises, and did little to change the trajectories of any of the candidates. The second focused more narrowly on the preset showdown between Mitt Romney and Gov. Rick Perry.

Stewart began by making the joke I made last night about Michele Bachmann‘s odd assertion that “kids need jobs,” then pivoted to polling blip Jon Huntsman’s doomed science-loving platform, quipping that with Huntsman’s science answer, he “evolved into someone with no chance of winning the Republican nomination.”

He also dinged the political media for pre-setting the narrative, and seemed to agree with Newt Gingrich that the moderators were trying their level  best to provoke a fistfight between preordained contenders Mitt Romney and Gov. Rick Perry:

In the second segment, Stewart zeroed in on the difference between the political media’s verdict that Perry had “destroyed his candidacy” by doubling down on his Social Security/Ponzi scheme comparison, and the reality of Republican primary voters who, even in left coast Simi Valley, “thirst for blood” at the mention of Perry’s record as a death dealer. He also evokes Chris Mattews’ earlier statement about the intellectual bar that Perry has to meet, saying, “You don’t get Rick Perry here (pointing to his head), you get him here (pointing…under his desk).”

Stewart sticks the landing by playing Rev. Al Sharpton’s suggestion for a campaign slogan, “It’s not about Obama, it’s about your mama,” before declaring, “We’ve just concluded our second segment of ‘Oh, my God, Rick Perry is going to be our next president!”