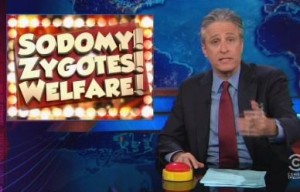 Jon Stewart tonight turned away from the absurdity of Congress to absurdity on a more local level. He described states as the “meth labs of democracy,” and played a game of “Sodomy! Zygotes! Welfare!” to find out which eyebrow-raising laws have been passed by individual states, including (you guessed it) sodomy, zygotes, and welfare.

RELATED: Stewart Mocks Opposition To Voting Rights Act: Why Not Go Back To ‘Discriminating First, Stopping It Later?’

Stewart then turned to Kansas, Arkansas, and North Dakota setting strict limits on abortion. Stewart summed up this and the sodomy law as states saying “you gotta have the baby-making sex, and you gotta have the resulting baby.” But as for what to do when the baby is born?

Well, in Tennessee, state legislator Stacey Campfield is proposing cutting welfare for parents if their children get bad grades in school. Stewart slammed him as a “villain from a Dickens novel,” and pointed out that Campfield once said that AIDS was spread because a man had sex with a monkey, then a bunch of men. Stewart said that if he really wants to tie money to people’s education, a comment like that has “got to be worth 40 percent of your salary.”