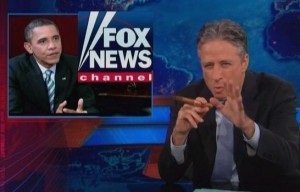 Earlier tonight, we covered a Sean Hannity segment in which he played a video of President Obama saying he doesn’t have the authority to unilaterally change laws. Hannity used this clip against the president, attacking Obama’s method of enacting new immigration policy. On Tuesday night, Jon Stewart took aim at this line of argument, criticizing Fox News for cutting off the video just before the president clarified his remark.

Stewart headed the segment first zoning in on those who were unhappy with the president for using executive power to make this decision about deportation. No other modern-day president has acted thusly. Except, of course, Stewart added, George W. Bush (regarding Liberia). And Bill Clinton. And George H. W. Bush. …And Ronald Reagan.

But he digressed, turning to Fox News’ segment that aimed to catch Obama contradicting his view of his own authority. In a video from less than a year ago. The clip Fox News played included Obama said the following:

I just have to continue to say this notion that somehow I can just change the laws unilaterally is just not true. We are doing everything we can administratively. But the fact of the matter is there are laws on the books that I have to enforce. And I think there’s been a great disservice done to the cause of getting the DREAM Act passed and getting comprehensive immigration passed by perpetrating the notion that somehow, by myself, I can go and do these things. It’s just not true.

Game over, Stewart said. “I’m kind of a dick” to Fox News, he said, “but they got it right. I commend them.” But actually…in that video, it kind of looked like the president wasn’t done speaking. Let’s just double check, he said, rolling the longer clip. In it, Obama’s remarks continued off where Fox News’ clip left off:

The notion that somehow, by myself, I can go and do these things is just not true. What we can do is to prioritize enforcement — since there are limited enforcement resources — and say, we’re not going to go chasing after this young man or anybody else who has been acting responsibly, and would otherwise qualify for legal status if the DREAM Act passed.

“Motherfuckers!” Stewart exclaimed. “They cut him off just before he very clearly says that he can do the exact thing he just did, but which you said he said he’s not supposed to — motherf**kers!”

“You almost had me, Fox News,” he added. Close, but no cigar.