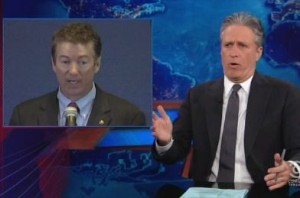 Jon Stewart tonight continued examining the progress the Republican party has made reaching out to minority voters… or lack thereof. Stewart mocked Rand Paul for his awkward address to Howard University on why black voters ought to be sticking with the GOP, surmising that “the Republicans left black, now they want to go back.”

On Paul’s point that the GOP isn’t doing well with black voters because they haven’t done enough to emphasize the link between the party and African-Americans, Stewart used a Seinfeld reference to explain that you just can’t say Republicans supported black people, then “yada yada yada,” then we need black support again. He pointed out that “bigoted Democrats” became Republicans in the post-civil rights era.

When Paul’s history lesson to the crowd got a little awkward, Stewart imitated Paul’s security team, saying “Remove the vanilla bean from the hot chocolate!”

One big sticking point with Stewart was that Paul said people have called him “brave” or “crazy” for speaking at Howard University. Correspondent Larry Wilmore dismissed the idea Paul’s brave. He said, “It’s Howard University, not the Apollo.”

They brought up a GOP county commissioner who used the word “nigger-rigging,” and Wilmore said it’s time for the GOP to admit that this isn’t, like Brad Paisley and LL Cool J would call it, “accidental racism.”