Jon Stewart Slaps Down Obama For Debt Deal: ‘You’re Not Pinning This Turd On Us’ 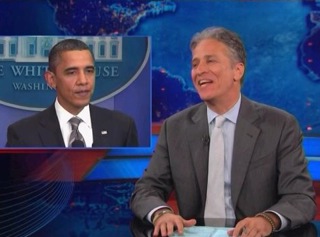 The debt deal has most Americans at least somewhat disgusted as they spent the week watching budget sausage get made, and tonight Jon Stewart led the left flank of outrage in decrying the agreement. He didn’t have too many punchlines in his quiver today, just stern words for everyone involved in the process: refusing to allow President Obama to “thank the American people” for the bill and chiding Tea Partiers for opposing big government.

After showing a montage of clips of President Obama insisting that revenue increases must be part of the debt deal, Stewart played the tragic news to liberals: there would be no revenue increases in the debt deal. “I was really hoping that clip was going to be a lemur with his head stuck in a tub of mayonnaise,” he lamented. But his sadness became rage as the President thanks the American people for their involvement in this all. “Oh no, you’re not pinning this turd on us,” he said angrily, mocking his praise for Speaker John Boehner and the bow-tied correspondent whose questions he answered in equal measure.

“So the Democrats got hosed,” he admitted, then turning to the right and expecting a well-deserved victory lap. Instead of joy, however, he found many Tea Partiers refused to vote for the bill because it did not cut enough. “What the fuck?” he repeated a couple of times (again, this wasn’t a segment heavy on jokes). “Yes, government still exists,” he cried. “We still have traffic lights.” He then chided them for, essentially, being anarchists: “government isn’t perfect, but some people wish it was better– not gone.”

The heated segment via Comedy Central below: