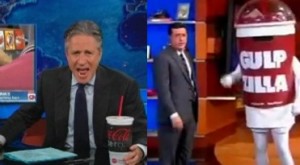 Everyone seems to be having fun at New York Mayor Mike Bloomberg‘s expense, mocking Hizzoner’s proposed ban on the sale of sugary drinks in excess of 16 oz. at restaurants, movie theaters, and delis. On Thursday night, both of Comedy Central’s Clown Princes Of Funditry™, The Daily Show’s Jon Stewart and The Colbert Report‘s Stephen Colbert, got into the act with Bloomberg-themed bits, but each were brought low by that bane of the comic’s existence: inconsistent props.

The Daily Show‘s segment began with Jon Stewart enjoying what he called a “comically oversized movie theater beverage” as he watched news clips about the proposed ban on large, sugary drinks. The only problem is, the cup he was drinking from bore the comically oversized label “Coca-Cola Zero.”

At least Stewart got the place of purchase right, though. Colbert’s bit culminated in the execution, Of Mice And Men-style, of Drinky, Colbert’s pet giant beverage. Drinky, his label says, is a “Gulp-Zilla” whose size and shape closely resemble that of a “Big Gulp,” a 32 ounce monstrosity sold at 7-Eleven, which is a convenience store, which means it would be…exempt from Bloomberg’s law.

In fairness to Colbert, lots of news outlets have mistakenly used the Big Gulp as their giant beverage touchstone, but is it too much for Comedy Central fans to ask that our comedy bits be legislatively correct? I mean, what’s next, a bit where an insurance company applies a preexisting condition limitation within 62 days of the customer’s last continuous group health coverage? Am I right?

Yes, it’s nit-picky, but it also gives me a chance to weigh in on the War on Soda controversy. In a rare bit of Kum Ba Yah, I’m going to agree with my conservative brothers and sisters, this is a silly, overreaching law, as illustrated by the difficulties encountered even in accurately making fun of it.

On the other hand, food and beverage companies and restaurants have been conditioning Americans, for years, to consume larger and larger portions as a way to eke a few extra bucks out on their per-check average. That’s why you can order a half-rack of ribs for $20, or you can get double that for another five bucks. Who buys the half-rack? Now, who would buy the half-rack if it was $12?

My local supermarket sells 7.5 oz. cans of Coke for $4 per eight-pack. That’s 60 ounces for four bucks, or quadruple what you can get a 2 liter (about 64 oz.) bottle for. Now, I can see paying a little bit extra for convenience, and some extra aluminum, but quadruple? Just as Bloomberg tried to use the law to condition us to smaller portions, these companies are using price-gouging to condition us to larger ones.

It’s a smart strategy, but if enough customers get Type 3 diabetes and stop eating and drinking this stuff altogether, these companies will have to change their behavior.

In case you missed them, here are The Daily Show and Colbert Report segments, from Comedy Central: