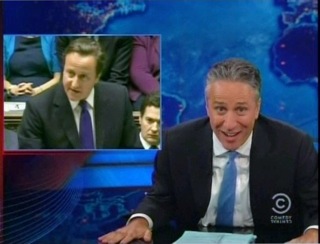 The characters involved in the Rupert Murdoch News Corporation scandal have captivated Jon Stewart‘s imagination– “News Corp Owner Montgomery Burns,” his “crimefighting wife, Wendi,” and, perhaps especially, the UK’s Parliament, a shouty horde of righteous politicians. Repeatedly shouting that “England is awesome!”, Stewart noted that PM David Cameron had left a vacation to return to Parliament, while, he lamented, “we can still only get [Obama] on voicemail.”

After a few perfunctory jokes about Murdoch’s age and overall sleepiness, Stewart turned to his wife, “seen here pummeling an idiot.” But it was not only Deng’s ability to attack her husband’s assailant that astonished him, but her ability to scowl at everyone at the hearing. “The last time I saw anything even close to that,” Stewart noted, “was when Willie Geist stared down Mark Halperin for calling the President a ‘dick.'” The memory, of course, called for a “scowl-off,” but it was a mismatch– “her scowl makes his scowl look like approval.”

But that hearing was yesterday, and today brought in new footage of angry, shouting MPs assailing Prime Minister Cameron. “That’s awesome!” Stewart shouted, reminding Americans of what our Congress is like: “remember when someone yelled ‘you lie’ during out State of the Union?” Good memories. He also made a point of noting that Cameron had actually had to leave a trip to Africa to return for the hearing. “Our guy stars a war,” Stewart griped, “and we can still only get him on voicemail.”

Stewart then concluded with a bittersweet point about the nature of the Special Relationship: “Here’s what’s sad… we fought so hard to leave England because of their unaccountable imperial leadership…” trailing off towards the now-obvious point.