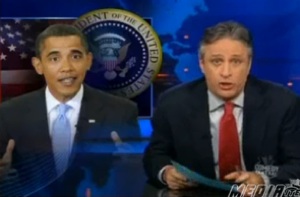 Last night Jon Stewart took his critique of President Obama – and his response to the BP Oil Spill – to a level not seen since, well, the Bush administration. How bad was it? Stewart even made fun of Obama’s ass kicking commentary by busting out his old George W. Bush impersonation (heh heh heh.) Has Obama completely lost Stewart (and his legion of fans)? Probably not yet. But when The Daily Show host notices looks like a pattern of rhetorical bullsh*t…well, perhaps we should stay tuned for more to come.

The White House communications office is probably a little more stressed today than normal, because losing the hearts and minds of Daily Show viewers cannot be good news. In the following clip, Stewart took apart the many absurdities surrounding the oil spill (and its media coverage) but saved his harshest critiques for Obama, claiming that he’s succumbed to pressure of media pundits who have demanded that he show more emotion (ergo, the ass kicking line.)

But it was the president’s professorial style, especially his oft-repeated comment that problems are “complicated,” that seemed to be Stewart’s most effective criticism. Playing repeated clips of Obama claiming that whatever issue of the day is complex and complicated – as he has said about health care, the oil spill clean-up and other countless topics – no longer has the intended effect of demonstrating a thoughtful mien; it’s beginning look more like a Presidential excuse, or worse, that every issue is too complicated for his administration to be effective.

Stewart summed up the nine-minute segment with a larger critique of any Government response as he exasperated, “It cannot be that the only thing that our government is good for anymore is war. We have to at some point use the same urgency and preparedness that we brought to take other country’s oil, to clean up our own. So I’m glad that you are looking for an ‘ass to kick,’ but right now I gotta tell you, the ass has been kicking you.”