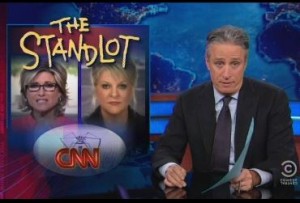 Jon Stewart has repeatedly ridiculed and slammed CNN in the past few weeks, most recently on Monday during an interview with Christiane Amanpour. He gave the cable network a brief respite Tuesday night before going right back to hammering them for one particularly odd moment in their otherwise unexciting coverage of the Jodi Arias trial: Ashleigh Banfield doing a satellite interview with Nancy Grace… when the two of them were a few feet away from each other in the same Arizona parking lot.

Stewart explained how Banfield and Grace were set up as if they were in different locations, it’s pretty obvious that the same vehicles are going through both shots. Which meant either they were sitting pretty close to each other or, as Stewart hypothesized, it could be that Arizona is plagued by a “seven-mile long Bus Ness Monster.”

Stewart was amazed by the audacity of CNN making his “pretty shameful” gesture, though he figured it could have been because Banfield has taken out a restraining order against Nancy Grace. They did try to create the illusion of not being so close to each other, and when Grace couldn’t hear Banfield right, Stewart just shouted at her to “take your finger out of your fucking ear because she’s right there!” He asked, “Is anyone at CNN allowed indoors anymore?”