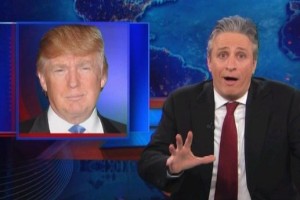 On Thursday’s Daily Show, Jon Stewart had a revelation to share — despite the soap operatic nature of the 2012 GOP nomination race (“some fine debate, dramatic story lines”) he has felt a certain “emptiness” in his life — a “mogul-shaped hole” in his heart. Finally, this morning, Stewart had some hope in the world, when news broke that Donald Trump was making a major announcement. “I haven’t been this happy to see an orange face again since the end of Finding Nemo!”

Realizing Trump was merely endorsing Mitt Romney, Stewart groused “Oh, that’s it? Just an endorsement of the current front-runner and presumed nominee? Never saw Trump as a Romney guy. Always saw Trump as the kind of guy whose ostentatious lifestyle was driven by a slight, a guy like Romney gave him years ago, you know what I mean, like that prick thinks can keep me out of the country club, I’ll build my own and it will have a statue with Perrier coming out of Athena’s nipples in it!”

Suddenly, after playing many of Romney’s choice quotes on capitalism, Stewart realized the two were both meant for each other. “This guy, he likes firing people! He loves corporations, the only thing I’m not crazy about is the whole same wife for 42 years thing, but you know, I can overlook it! (This shows) Americans that if two Ivy League-educated successful business tycoons from wealthy families can find common ground, even when one is a billionaire and the other only a multi, multi, multimillionaire, maybe there’s hope this country isn’t so divided after all!”