Jon Stewart Talks Tough To GOP Base: ‘Your Candidates Aren’t The Problem – It’s You’ 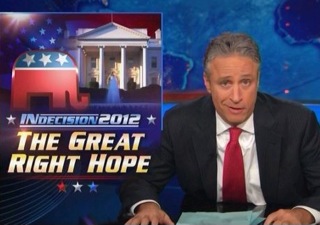 Today was Jon Stewart‘s first time at bat since last Thursday’s Republican debate on Fox News, and he left no stone unturned in analyzing the aftermath of the debate. Yes, Stewart chided the crowd for allegedly booing after a question by a gay soldier in Iraq. He tore Rick Perry apart for sounding high when taking on Mitt Romney. But no candidate got hit harder than the Republican base itself for being consistently dissatisfied with its candidates, now apparently setting its hopes on New Jersey Governor Chris Christie.

After an extensive mockery of the fact that we have had a debate a week for a good month, Stewart began taking down each candidate in turn. To Rick Santorum‘s response to the gay soldier in question asking about Don’t Ask Don’t Tell– a policy Santorum would reinstate– Stewart didn’t exactly have any jokes, modestly asking “what planet do you f*cking live on?” and griping, “this guy is an idiot!” Stewart didn’t go as far as to call Perry an idiot, but imagined him saying to himself “I nailed it… I can’t believe my advisers told me not to get high during this debate.” And then there was Chris Christie, who isn’t even a real candidate, but proved that no one really wanted Mitt Romney to win the nomination.

“It’s like the Republican primary is a season of American Idol in reverse, where every week you just add some new idiot,” he joked. But it wasn’t Christie’s fault he was getting dragged in to Stewart. “Your candidates aren’t the problem– it’s you,” he told the base.