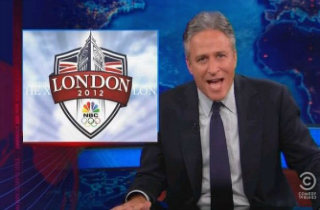 Monday night on The Daily Show Jon Stewart viciously mocked NBC for its decision to edit out of Friday night’s Olympic opening ceremony dance tribute to the victims of the 2005 London terror attacks.

Stewart praised the opening ceremony as an “incredible, cheeky at times, poignant spectacle. Very moving, except, of course, for the American audience,” and then cut to a news report mentioning that NBC edited out the dance tribute and instead aired a Ryan Seacrest interview with Olympic swimmer Michael Phelps.

“Are you kidding?” Stewart said. “NBC, the network that to commemorate 9/11 actually reruns 9/11, wouldn’t air a six minute tribute to the rest of the world’s terrorist victims?” He added that NBC Sports issued a statement saying that the program is tailored for American audiences. “You’re NBC — you don’t know how to tailor television for an American audience,” Stewart quipped.

“If everything in the Olympics had to be an American audience why not go all the way?” he continued. “Instead of a parade of nations, 99% of which aren’t American, don’t bother showing us all 200 countries. Just give us, I don’t know, the all LeBron [James] parade! Instead of just 007 picking up the Queen, why not have Rambo storm the place and pick up some real American royalty [McDonald’s mascot Ronald McDonald].”

“Sometimes we Americans can be so arrogant, not understanding how we might appear to an global audience,” Stewart said as a transition to mocking presumptive Republican nominee Mitt Romney for telling NBC that he found several things “disconcerting” about how London was handling the summer games.

“What are you doing?” Stewart asked. “This is no time to display your sophisticated knowledge of the inner workings of Olympic preparation. You are a guest at a dinner party that already started five minutes ago. Nod your [bleep] head and say it is delicious that is all you have to do.”

Watch the segment below, via Comedy Central: