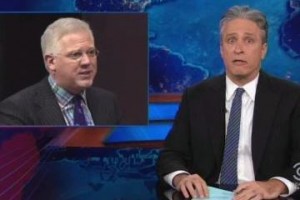 Jon Stewart opened Monday night’s edition of The Daily Show by looking back at the weekend’s NRA convention and its not-so-singular focus on guns. With Ted Cruz, Rick Santorum, Sarah Palin and others in attendance, Stewart realized, “this is the same lineup, with the same laundry list of conservative grievances, that we saw at CPAC a month and a half ago.”

Eventually the speakers did get to the primary issue of guns, with Glenn Beck going after President Obama for his “tactics of fear and darkness.” Stewart congratulated Beck for acknowledging that “fear mongering is wrong” before playing another clip of him saying, “the only difference between your mom and sister getting raped and then walking home unmolested is a gun.”

Based on Beck’s warnings against tyranny, the “government is the bad guy.” But based on LaPierre’s praise of the Boston police, “government is the good guy.” By the end of the segment, Stewart said he believes we all want the same thing: for “bad guys not to have guns.” While he and other Democrats want background checks, it appears some on the right want to “wait for a bad guy to draw and then draw faster.”

But if that’s the case, he said, “stop pretending that background checks are the last barrier standing between a free America and Obama-sponsored government mom rape.”