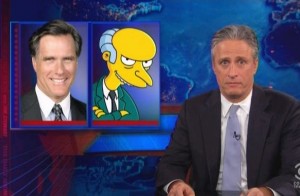 On Tuesday night, Jon Stewart took on the current campaign controversy: Mitt Romney‘s hidden video about those “47 percent” of voters. Noting Romney’s damage control, he mocked the GOP presidential hopeful’s brushing off the incident while clearly being rattled by it.

Stewart began by noting that before this whole debacle, the Romney campaign had hit the reset button, which he likened to goading a girl to go on a seventh date…because this time, she’ll like him.

Nonetheless, Stewart moved on to the now-infamous video, in which Romney spoke “in a manner you would imagine cartoon rich people talk about cartoon poor people.” Diving into his narrative, Stewart took a look at who these “47 percenters” who don’t pay income tax really are. Turns out, nearly two-thirds pay payroll tax and the “true freeloaders” are actually comprised of those making less than $20,000 a year — including the elderly (i.e., “Nana”).

Continuing, Stewart played a clip in which Romney’s mother, Lenore Romney spoke about Romney’s father who received welfare assistance. Thus, by Mitt Romney’s logic, Stewart deduced, “Mitt Romney could not win the vote of his dad.”

But the ordeal wasn’t over without some good old damage control. There was the press conference — wherein Romney explained that he didn’t make his point in the most elegant or effective way. Here, Stewart noticed a dichotomy between what he was saying with his words and what he was saying visually. Donning a prop to make his point, Stewart remarked that it’s rather like a captain announcing the ship’s approaching an iceberg, but encouraging calm as he inflates his life vest. (Spoiler: That ship is probably going to sink.)