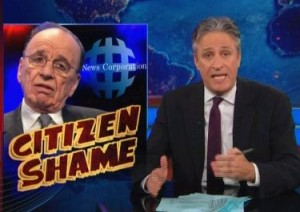 Rupert Murdoch’s been facing some troubles lately (putting it lightly), and on Thursday night, Jon Stewart tackled the media magnate’s scandal head on. And then connected him to another man we know so well: Donald Trump.

Murdoch, Stewart said, “known as Yahoo, finds himself still in a spot of trouble in Great Britain, simply because several of his newspapers hacked the phones of celebrities, politicians, a 13-year-old murder victim, and the relatives of some killed in action British Soldiers and allegedly bribed Scotland Yard detectives to help with the cover-up.” Yep, that about sums up the highlights.

Stewart then proceeded to thoroughly mock the answers Murdoch’s provided during questioning. Is he responsible? No. So who is? “The people that I trusted to run it and then maybe the people they trusted,” Murdoch responded.

“My God!” Stewart said. “This scandal goes all the way to the bottom!” He then moved on to Murdoch saying it’s a myth that he “used the influence, the supposed political power, to get favorable treatment.”

Stewart asked, “Do you mean that as in it’s a fanciful way of explaining things that are hard to explain, or that it’s a story about how grotesquely powerful beings assume various forms to fuck mortals?” Noting Murdoch’s connection even to Prime Minister David Cameron, Stewart added, “In the States we’re not allowed to give Congress people T-shirts and hats, and our country’s corrupt as shit.”

Murdoch’s defense, Stewart said, seems to be that he’s no “evil genius Randolph Hearst type figure, I’m like the Australian Mr. Magoo.” Meanwhile, Trump was also giving a testimony in the UK this week, regarding a wind turbine being built off the coast of a goal resort he bought.

You see the difference? “Here’s Murdoch: Hey, mate, I did have a dinner, but yeah, maybe they were there. I don’t remember,” Stewart said. “And here’s Trump: we colluded on this! […] what are you doing?!”