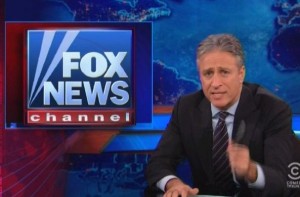 On Monday night, Jon Stewart took a look back at President Barack Obama‘s appearance on Stewart’s own show last week — during which the pair discussed the recent attack in Libya. Following the interview, Obama’s “not optimal” caught on, Stewart noted, particularly with conservatives. Taking a trip to Bullshit Mountain, Stewart diagnosed Fox News and the like with “Baracktose intolerance.”

The “conservative Twitterati pounced” on the “not optimal” remark, Stewart noted, pointing first to Sen. John McCain‘s response. But Stewart allowed everyone a chance to sleep on it, to review the comments in context.

Cue a montage of the following day’s outrage, which included descriptors such as: embarrassing, cold, callous. “I thought the tone and context of the conversation in no way reflected a president dismissive of the gravity of what happened in Libya,” Stewart said. Perhaps conservatives would be appeased if Obama had directly referred to the situation as tragic — but, oh wait. He did.

Noting the “inexplicable eruption resulting from an innocuous stimulus,” Stewart observed, “It’s clear now that the right over time has developed Baracktose intolerance.” And it seems like it began back in 2008. To illustrate his point, Stewart rolled a montage, primarily comprised of Fox News clips, of various personalities posing questions like, “Who is the real Barack Obama?”

The answer, he said, can only be found on Bullshit Mountain. Er, the Fox News headquarters. Cue yet another montage, of Fox News-ers making ominous predictions about the consequences of an Obama presidency. Eliminating freedom of speech! Socialized economy!

None of this happened, Stewart added, but it didn’t quell the continuing swell of Baracktose intolerance, which then grew into pinning various labels on the president: communist, racist, Mubarak Obama, Stalin without the bloodshed.

Circling back to his point about “not optimal-gate,” Stewart said, “As predictable and hyperbolic as the announcements are, for some reason, other networks can’t resist its siren song.”

“That’s the thing about Bullshit Mountain,” Stewart said. “You may not live on it, but whenever it rains, you get the mudslide.”