Jon Stewart Tears Into North Korea Over War Threats: Do You Really Want To Be Our ‘Rebound War’?

Stewart Tears Into N. Korea Over Threats: Do You Really Want To Be Our 'Rebound War'?
Twitter share button 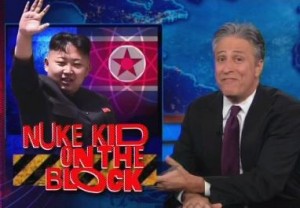 Jon Stewart tonight took on the North Korean threat and came off as more amused than threatened. He mocked the antiquated technology and old-fashioned military tactics of North Korea and its new leader, Kim Jong Un. And upon hearing that all the macho threats are just a way to bolster the new leader’s support at home, Stewart invited North Korea to just “tell them you already conquered us, we don’t care!”

Stewart mocked the North Korean leader for noting on a chart that they have missiles that could hit Austin, Texas. He quipped, “What are you, just trying to get the rest of Texas on your side?” He also observed that a North Korean computer looks like “a harpsichord with a panic button.”

Also on the technological front, Stewart took a shot at an allegedly Photoshopped image of six North Korean hovercrafts, getting in a dig at MS Paint and Windows 95 which led to The Daily Show momentarily facing the dreaded blue screen of death.

Stewart rolled his eyes at Kim Jong Un’s “retro” way of preparing for war, indulging in a little bit of nationalism over the impressiveness of U.S. stealth bombers. He likened North Korea to a new girlfriend after the U.S. just ended two very serious relationships with Iraq and Afghanistan, and the most North Korea could hope for is a “rebound war.”

But when Stewart found out that Kim Jong Un is making the threats to look good domestically, he asked why North Korea doesn’t just pretend it conquered the U.S. already, since no one there has access to Western media outlets. Stewart even suggested mocking up a fake photo, since North Korea is supposedly so good with Photoshop, of a Kim Jong Un statue having sex with the Statue of Liberty.