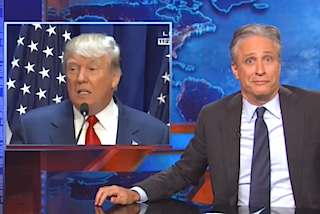 As we all hoped and prayed he would, Jon Stewart opened The Daily Show Tuesday night with the “gift from heaven” that is Donald Trump’s 2016 presidential announcement. But before the delicious dessert, Stewart decided to feed his audience some “spinach” in the form of Hillary Clinton and Jeb Bush’s campaign launch speeches that occurred in quick succession over the last few days.

“Pick up the pace, there’s a crazy person running for president!” the host screamed at Clinton as he attempted to get through a quick clip of her remarks.

Without much further delay, Stewart moved on to the moment he and his audience had been waiting for. “A billionaire vanity candidate taking the escalator to the White House!” he said. “Let’s dance, Clownstick!”

Stewart reveled in the speech, which he described as “the most beautifully ridiculous jibber-jabber ever to pour from the mouth of a batshit billionaire.”

“America’s id is running for president!” he exclaimed. “This speech was so fucked up that in the middle of it, all the liquid in his body tried to escape from the corner of his mouth.”

Despite what he hinted at a few weeks back, Stewart did not announce that he was canceling his retirement. But he did thank the new candidate for “making my last six weeks my best six weeks.”