Jon Stewart To Axelrod: ‘Has The Govt. During This Time Proved Itself Competent?’ 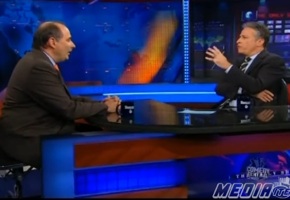 Senior White House Adviser David Axelrod appeared as guest last night on The Daily Show, and defended what Jon Stewart sees as presidential “mojo” in decline. With the BP Oil disaster, a fiery debate over Immigration reform and growing frustration with the bank bailouts, It’s been a tough few months (or quarters?) politically for the White House. In the past month or so, TDS has become increasingly more critical of this administration, and Stewart challenged Axelrod on whether the Government has yet proven itself competent enough to regulate industry.

A key component of the administration’s solutions to many of the problems this country currently faces is effective government intervention or regulation (key word: effective.) So Stewart’s questioning as to whether or not the government, under this administration in particular, has yet proven that they have the chops to effectively oversee or intervene in the very issues that trouble so many people, cuts to the very core of the effectiveness of President Obama’s efforts to exact change (for the better.)

JON STEWART: It’s clear that this administration believes that government can have a stronger hand in regulating Wall Street, in regulating energy, in doing these things. But, has government during this time proved itself competent? And are our only two choices sort of an incompetent bureaucracy that doesn’t quite regulate properly or free market anarchy? Before you can make the case that this administration and government can effectively regulate shouldn’t they, you know, the MMS case makes a pretty clear point that the regulatory system is somewhat broken, and you guys had a chance to…

DAVID AXELROD: The answer Jon is not to abandon the notion that there have to be rules and oversight. The answer is to make it, to make it work better. There’s a long legacy there at MMS, and frankly at other agencies of government because the last administration wasn’t really interested in regulating.

STEWART: But why then, why not then go in and really, with the urgency? You know, the fear is the government is not agile enough, is not urgent enough to deal with things like a catastrophic oil spill.

AXELROD: There is, there is no doubt that in retrospect we would have liked to move faster on the MMS situation, but understand that we were also dealing with the economic crisis, and, and, and, and, and the wars, and a whole range of issues, and we, that was, that was a defect that we’re correcting and moving aggressively to correct now. But the answer isn’t to walk away from it. I think we tested the proposition of what no regulation means. What you get, you get the leak, you get the mine disaster in West Virginia, and you get an economic crisis. And everybody recognizes that government has to play a role. It shouldn’t be an oppressive role, but there has to be some firm oversight and some rules of people respond to. These, you know, it’s pretty clear the oil industry is not going to regulate itself.

STEWART: But do you think, I guess my point is before you have the opportunity, before you can earn the ability to go in and, and, and do that, don’t, don’t we have to show a certain baseline level of competence.

The entire interview was not nearly as heavy as this transcription may indicate – in fact its hard not to feel some empathy towards the White House when Axelrod conveys a Charlie Brown sense of “we can’t win” when he sums up some of the unforeseen events with which this White House has had to deal, saying “the pirate has the captain – what do we do sir?” regarding the Somali Pirate story of many months ago.

All in all, its a very enlightening interview with Stewart once again demonstrating how to ask very smart and tough questions without advancing his own agenda nor putting his subject on the defensive.