Jon Stewart To Sarah Palin: Either You’re Running For President Or You’re Crazy 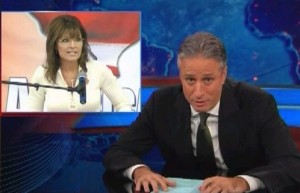 On The Daily Show Wednesday night, Jon Stewart looked into whether certain alternative presidential candidates sought out by Republicans are willing to throw their hats (or their shocking pink neckties, or their blue fuzzy vests) into the ring.

Stewart looked into New Jersey Governor and Great Right Hope Chris Christie‘s suggestion to visit Politico.com to watch a video of his response to the question of whether or not he’ll run. “Oooh, it’s like a treasure hunt, I love it!” quipped Stewart in his finest Mad Hatter voice. Christie’s answer is sweet and simple: “No.” But leave it to we the media to turn gold back into straw. Stewart played a (rather hilarious) clip of reporters saying Christie had “left the door open” to running. But the man said NO. “Chris Christie has given you his answer, so stop grinding up against him asking if you can just put the tip in!” he yelled, unfortunately.

Then there’s Sarah Palin, whose concern seems to be that the title of President would wrangle in her power. But the presidency is “one of the higher-level” positions we have in his country, a Stewart on the verge of a heart attack pointed out. And then there’s the matter of her recent speeches and appearances in early primary states “riding in a colorful bus” and “telling people what you would do if you were president,” which led Stewart to observe that “you’re either running for president, or you’re a crazy person.”